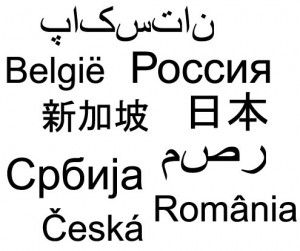 The next November 16th 2009 could be an important date in Internet history. At  least in terms of internationalization of Internet.

Let’s start first with this acronym ‘IDNs’ for Internationalized domain names, they already exist, but not for the full domain, the last part of the domains still remain in Latin scripts. Today they are available for main global extensions as the .com .biz etc… The Korean version of Starbucks website is also available on 스타벅스코리아.com.  They are also available for local versions with for example the Spanish accent if you book a .es

After the November 16th we will be able to book complete internationalized domain names which will allow Web addresses in Arabic, Hebrew, Hindi , Cyrillic, Chinese and others.

So Chinese websites will be able to use .中国 domain names for instance.

“This represents one small step for ICANN, but one big step for half of mankind who use non-Latin scripts” said Rod Beckstrom. Despite what said the President of the ICANN, it can not be as big of a deal as it’s supposed to be.

I am quite sure that in China it will be a good success since a lot of people don’t have any knowledge of western languages contrary to Israel or India.

But anyway, we can think the most part of the website will still keep with the latin scripts for their domains name, because:

– People have their habits now, in France we are able to use domain names with our accents like é, but I don’t know any website which uses that.

– There is no way to have an idea to internationalize your website if you already are “so” local, because one problem which is still not resolved is how people in countries that use the Latin script will be able to access Web sites with some of the Non-Latin script domain names.

– if half of mankind use non-Latin scripts, most of them use Latin keyboards

So  this should be just a new way to localize a website for country like China and Arabic or Russian speaking countries. Therefor it is especially good if the target of the website is to reach people who are not familiar with latin scripts which makes kind of a broad audience in some coutries like the older generations for instance.

Anyway the future will tell us, after seen the success, how to consider this new localization trend.