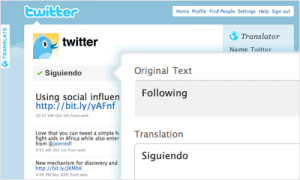 Last week Twitter announced that more languages will come soon on their website.  Twitter is now only in English and Japanese (due to the huge success in Japan since the beginning).

The next step will be 4 languages more, the usual FIGS (French, Italian, German, Spanish).   We can still wonder why wait that much time, it doesn’t seem to be that hard to translate a website, especially Twitter since there is not that much text.  They maybe wanted to stay focused on the early users and now I guess they realise that their tool start to reach everybody. I can see that in France, lot of (non-tech news) websites have now  a twitter account as for example the famous sports news papers L’Equipe, Le Monde, etc…

It also should be the starting point to add much more languages soon, as Facebook did quickly after the French and Spanish version.

The way to translate, will be the same as Facebook used, it means the community (now reserved to few users) will translate and vote for the best translation.  It’s empowering the idea of a community with average knowledge on a subject is better than  an expert’s. This is debatable.

After even if it’s simple, lot of people don’t get the point of Twitter, so by launching in other languages, Twitter should reach more people who heard about Twitter, but don’t really know how it works.

So now let’s see how these translations will work and especially the impact on the non-English speaking audience.

You can get to know more about the Twitter translation programme in this video: